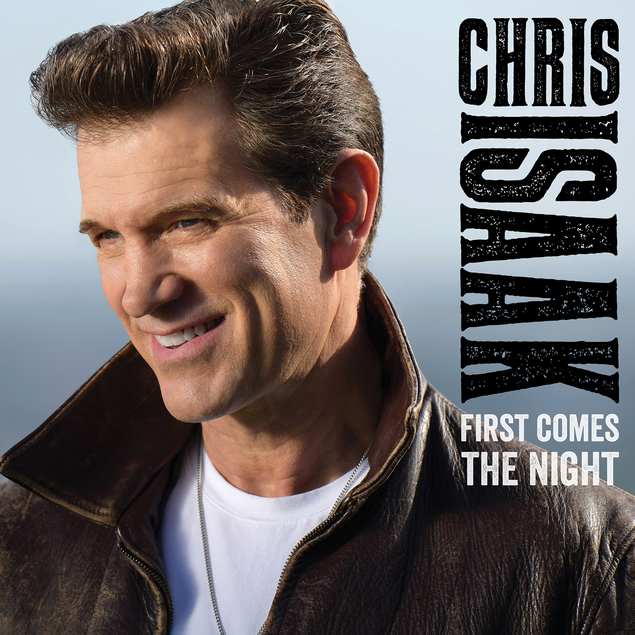 Chris Isaak’s new album FIRST COMES THE NIGHT, his first recording of all original songs in over six years, is available for pre-order beginning today. Fans can stream the title track which premiered exclusively via the Wall Street Journal.

FIRST COMES THE NIGHT is available for pre-order via iTunes and Amazon in two configurations – a standard version and a deluxe edition which includes five additional songs and an expanded booklet with added photos and illustrations. With each order, fans receive an instant download of the song “First Comes The Night.”

FIRST COMES THE NIGHT, produced by Paul Worley (Dixie Chicks, Lady Antebellum), Dave Cobb (Jason Isbell) and longtime Isaak collaborator Mark Needham, will be released on Vanguard Records on November 13th. Recorded primarily in Nashville and Los Angeles, FIRST COMES THE NIGHT with 12 new songs, is Isaak’s 13th studio album. A second configuration – a deluxe version with five additional cuts – will be released simultaneously. FIRST COMES THE NIGHT is the follow up release to Isaak’s critically acclaimed 2011 BEYOND THE SUN, his breathtaking tribute album to Sun Records, Sam Phillips, and the visionary artists who helped shape the early sounds of rock n’ roll.

“There was no mission for this album other than to follow the songs, and in terms of songwriting, the floodgates really opened this time," Chris Isaak explains. "My last release was Beyond The Sun -- my tribute to Sun Records with a lot of covers -- so this time around I had a lot of new material that I was thrilled to record."

FIRST COMES THE NIGHT fittingly represents a number of firsts for Chris Isaak, who recently signed on to become a judge on the new season of X Factor Australia. As for FIRST COMES THE NIGHT, this is the first time that Isaak has written and recorded so much in Nashville, Tennessee. He recently spoke with USA Today about the experience.

With a stellar reputation as one of the best and funniest live performers out there, Isaak is a non-stop touring, Grammy-nominated singer-songwriter, actor and talk show host. His vocal style has garnered enormous acclaim and his songs have been featured in numerous films including “Blue Velvet”, “Married to the Mob” and “Wild at Heart.”  His vast repertoire of long running hits include “Wicked Game,” “Forever Blue,” “Baby Did A Bad Bad Thing” and “Somebody’s Crying.” He has appeared on many TV shows – most recently “Hot in Cleveland”, has acted in several films and starred in Showtime’s The Chris Isaak Show and the Chris Isaak Hour on the Biography Channel.

Bonus Tracks:
Some Days are Harder Than The Rest
Keep Hanging On
Every Night I Miss You More
The Girl That Broke My Heart
Love The Way You Kiss Me